We took a delivery of a brand new 2014 Porsche GT3, which is based on the equally new 991 chassis. This is the first production year of the 991 GT3. Being suspension Geeks that we are, we’re pretty excited about this. Let’s not waste any time and see what’s hiding behind the wheels

First thing we need to mention is that the GT3 suspension varies significantly from other 991 generation cars. This car has modified bushings, bearings and significantly redesigned control arms and wheel carriers. Some of the technology is borrowed from the current and previous generation of the GT3 Cup car, but many more items were designed along with the current production line of the GT3 Cup. We’ll explain all of the differences. 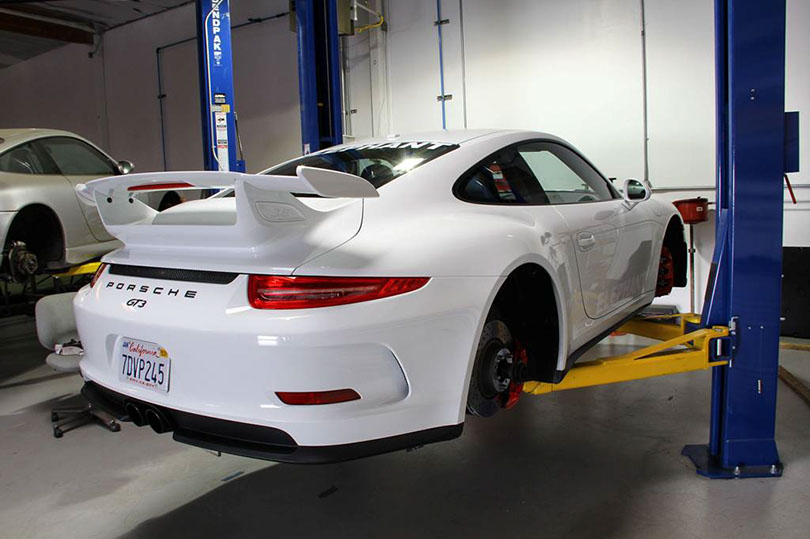 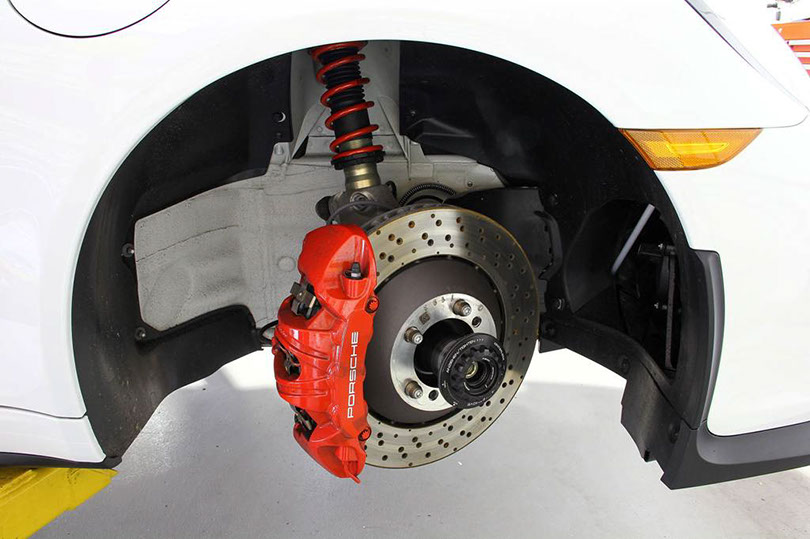 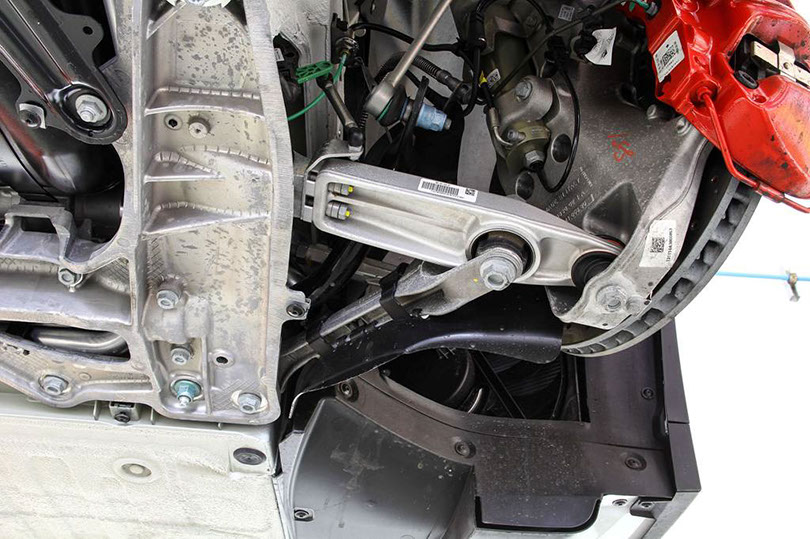 Please note that we’ve removed the font cover to better show the suspension.

Front control arm (or lower wishbone as it’s sometimes called) has been redesigned for the GT3, but the functionality stayed the same. We’ve seen the same design in the previous generation (997) GT3 Cup cars (track-only version of the GT3). The Length of the arm is adjustable by replacing or adding larger shims between the arm and the rear bushing mount. Extending length of the arm achieves added negative camber.

Single shear ball joints that are used on 991s, and all previouse generations of the GT3 street cars, is replaced with a double shear joint that bolts through the redesigned wheel carrier. The double shear substantially increases strength. Furthermore it enhances safety because a failure of the spherical doesn’t cause complete loss of control of the wheel.

Another interesting observation to note is that bolt heads have been bored. The only reason we can think of is to save weight. 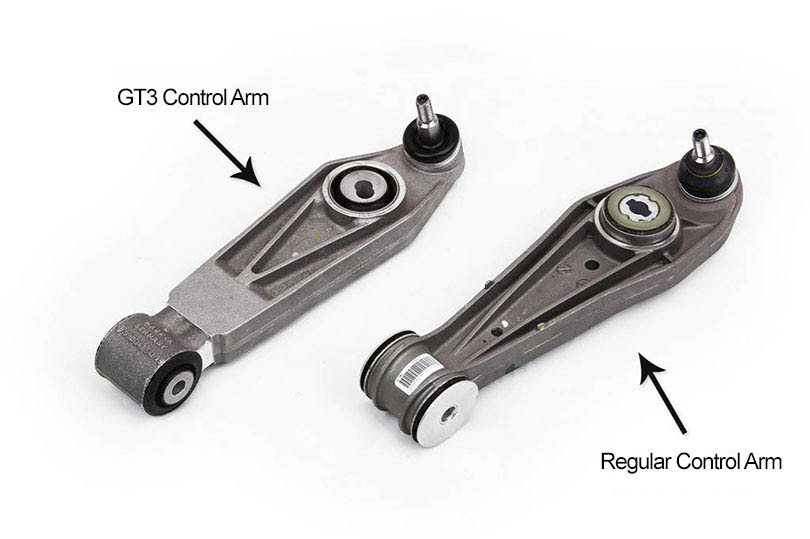 For comparison, on the left is previous generation of the GT3 control arm, and on the right is the current control arm found on regular non-GT3 991 cars. Note that both arms include a ball joint and not a bearing. 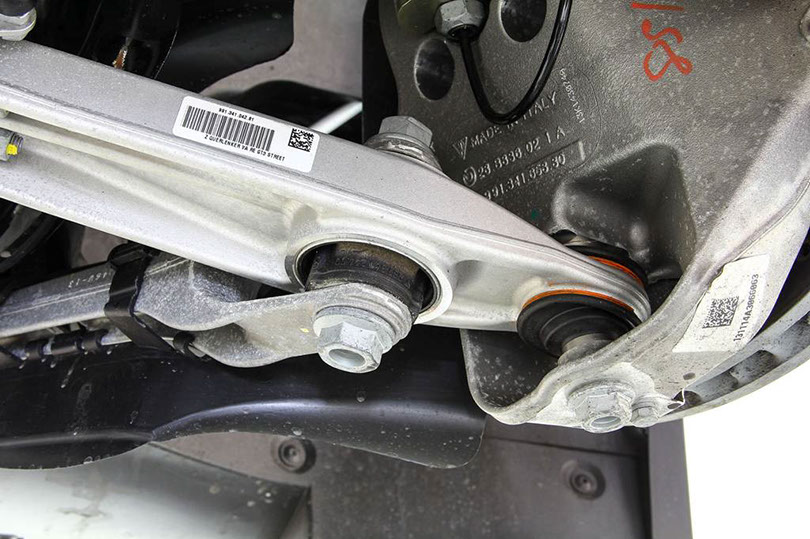 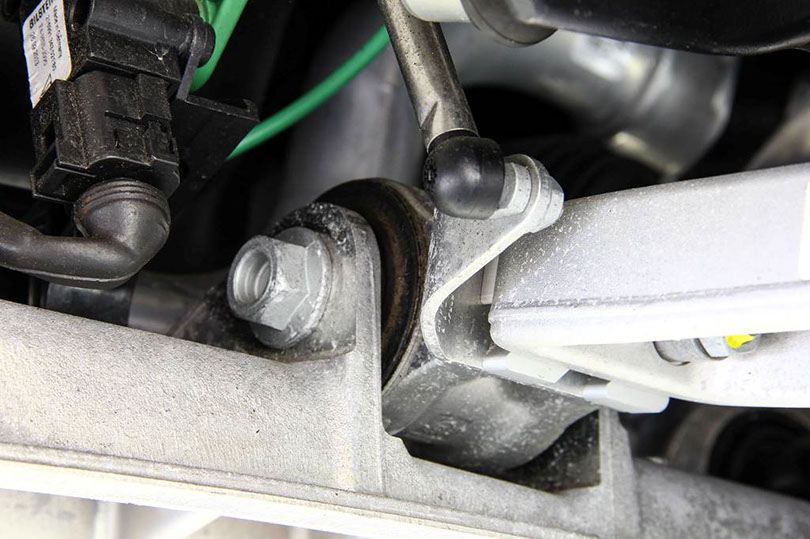 Leveling sensor bracket is mounted as an additional shim. This swing arm sensor is used to determine the angle of the wheels. The data is then used for headlight leveling, and possibly for PASM and PDCC input on cars with these features. The GT3 is not equipped with PDCC. 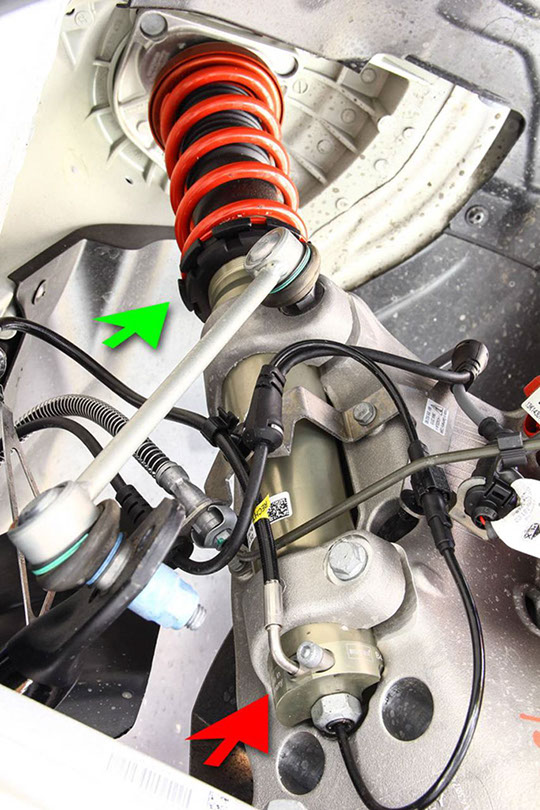 The GT3 shocks are true, height adjustable coilovers. By default, the GT3 sits about 30mm lower than a regular Carrera. There’s about 8mm left on the threaded body. So not much more room to lower any further. But that being said, the GT3 already sits low. Regular 991 cars do not have threaded body shocks and cannot be corner balanced.

Shocks are also equipped with Porsche Active Suspension Management — Standard on all new GT3s. PASM was introduced in 2005 year model with the 997 generation. It controls the valving of the shocks based on program selection. The two options on the GT3 are “Standard” and “Sport”. From our test drive, we saw little difference between the two settings, unlike the regular 991 cars, where change is quite noticeable. The GT3 likely has both settings in the sport end of the spectrum. You can see the PASM control cable coming out of the bottom of the shock and leads to the PASM ECU.

But what’s more interesting about this shock is the built in Front Axle Lift System. You can see the pneumatic hose (red arrow) inlet to the bottom of the damper. With the use of a small compressor, the lift system allows the driver to raise the front by 30mm in about 4 seconds. With the large front bumper overhang, this system is crucial for going over speed bumps and pulling out of slanted driveways. 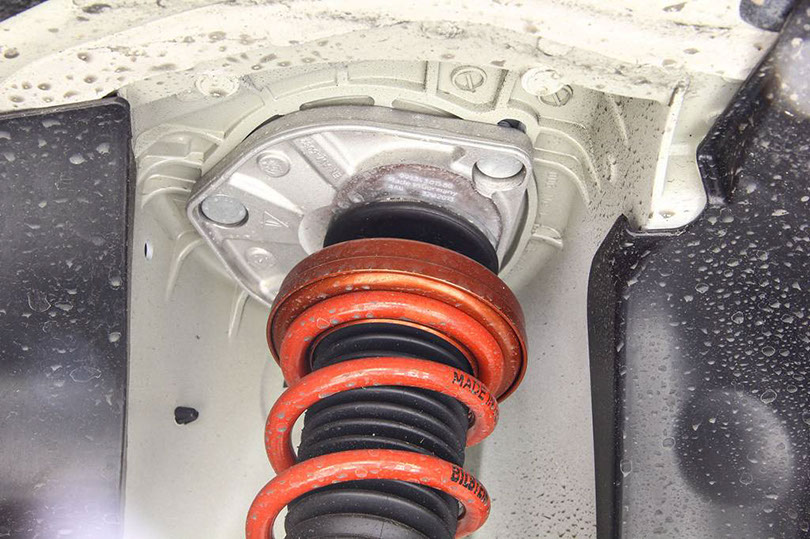 The camber plate has some range of adjustment with use of slotted bores. This is good for making fine changes to the camber.

On the GT3, bushing is replaced with a spherical bearing and sealed with a rubber boot. A spherical bearing in this place is a welcome improvement over the rubber. Rubber deflects sideways under cornering loads, causing loss of camber just when it’s needed the most. But also, the rubber acts as a spring in series with the strut. The spring-action is completely un-damped and reduces the struts ability to control the tire contact patch. The spherical bearing allows the strut damper to do its job and control the contact patch. The regular 991 cars retain the original Rubber bushing.

Another interesting feature of the GT3 camber plate is that it’s non-concentric. The strut top placement is offset to give the car a massive caster. The extreme caster causes a large camber change when the wheels are steered – both wheel leaning into the turn thus enhancing grip. 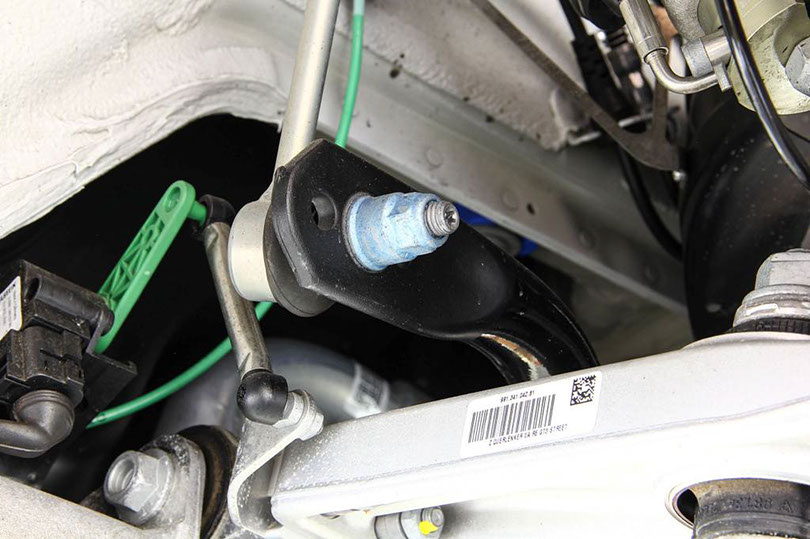 The front swaybar (or anti-roll bar) is thicker than the one found on previous generations of GT3. We measured them at about 30.3mm. The 997 generation GT3 had a 27mm bar. The swaybar is adjustable with 3 offset bores, a bit more limited from the 5 positions offered on 996/997 cars. The default setting is the middle bore.

Drop links connect to the top of the wheel carrier as pictured in the second photo above. The front drop links being attached to the struts creates a ‘weight jacking’ effect. Turning the steering has the effect of lengthening the outside drop link and shortening the inside drop link. These creates a preload on the swaybar, or weight jacking (wedge in circle track speak), which helps the car turn in the desired direction. This has been present in all the 911 cars beginning with the 996. 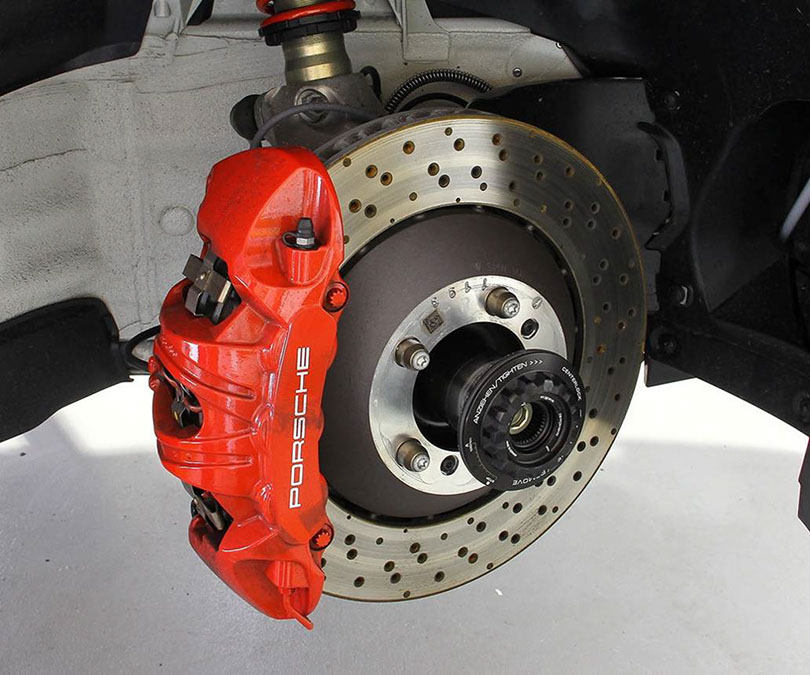 First thing that strikes the eyes are the enormous 380mm rotors and six piston calipers. This brakes are massive. The rotors are two piece, iron/aluminum construction, cross-drilled and internally vented.

The six piston, aluminum calipers hold a pair of large pads, they pack enough power to stop the car from 60mph in just about 100 feet. 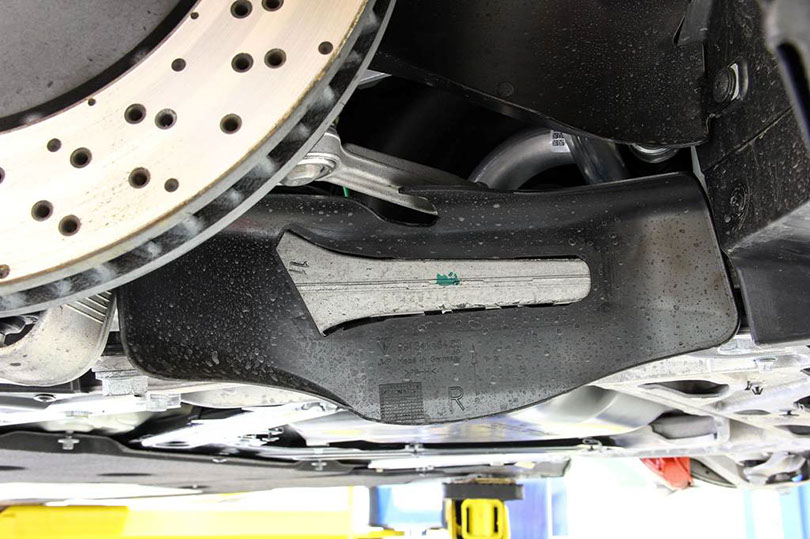 The brakes are being cooled by duct work that draws air from underneath the front bumper and radiator inlets. An air shield is mounted on the side of the caster arm and deflects air towards the rotors. Second shield just above it is positioned directly behind the radiator. It also forces the air around the rotors. 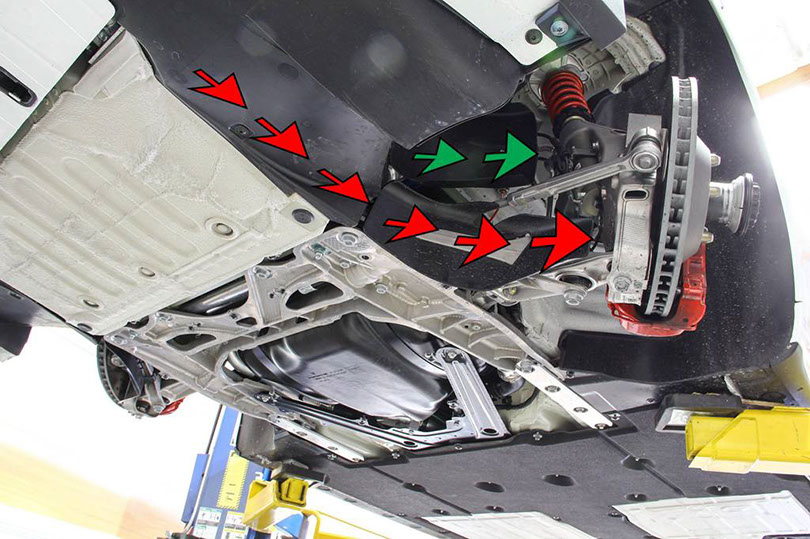 This diagram shows air movement around the brakes.

Let’s jump to the rear. 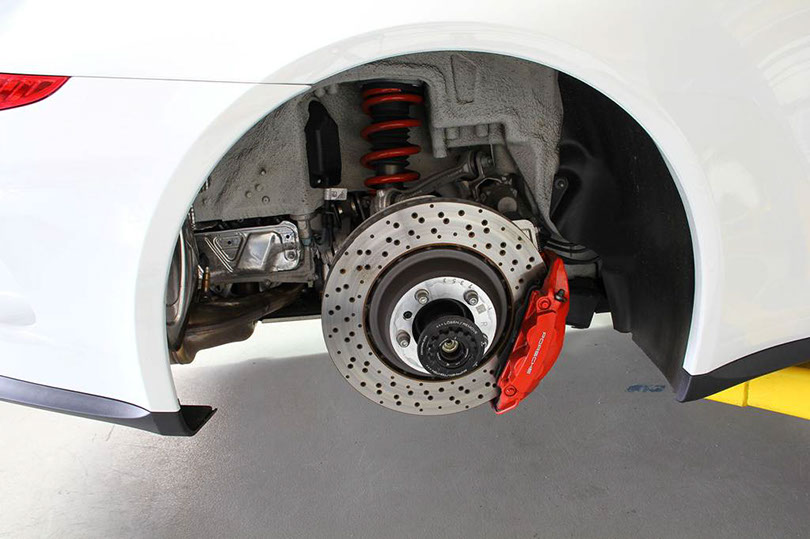 The rear is where a lot of interesting things happen. Completely redesigned for the 991, there’s very little left that still resembles the familiar 996/997 suspension. Furthermore, the 991 GT3 suspension is redesigned even further from the standard 991 cars. The GT3s now share the rear suspension components with the 991 Cup cars. 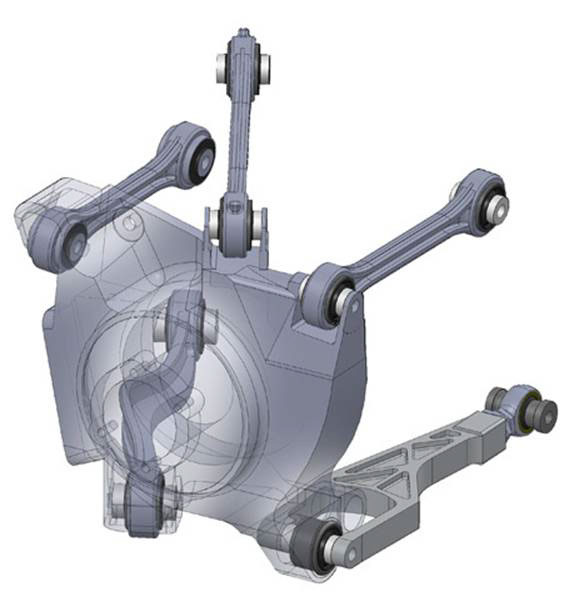 Here’s a CAD representation of how the rear suspension of the regular 991 car looks like. Please note that the standard lower control arms differs from what is pictured above. 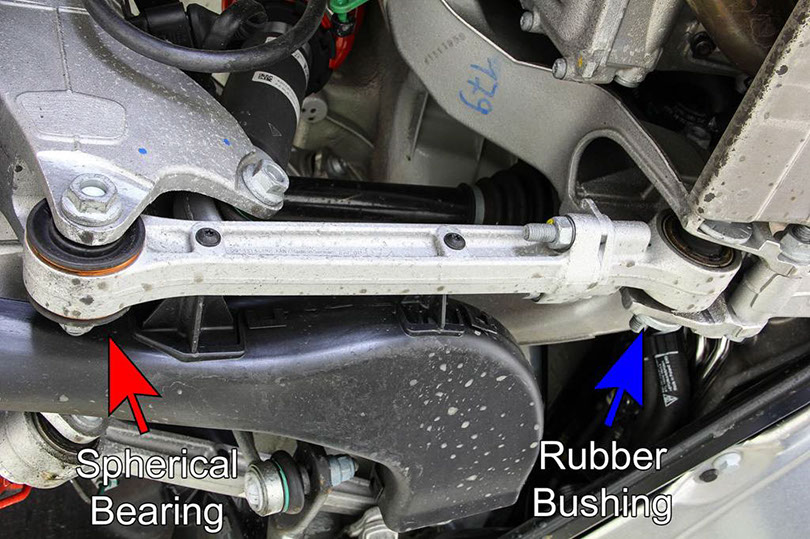 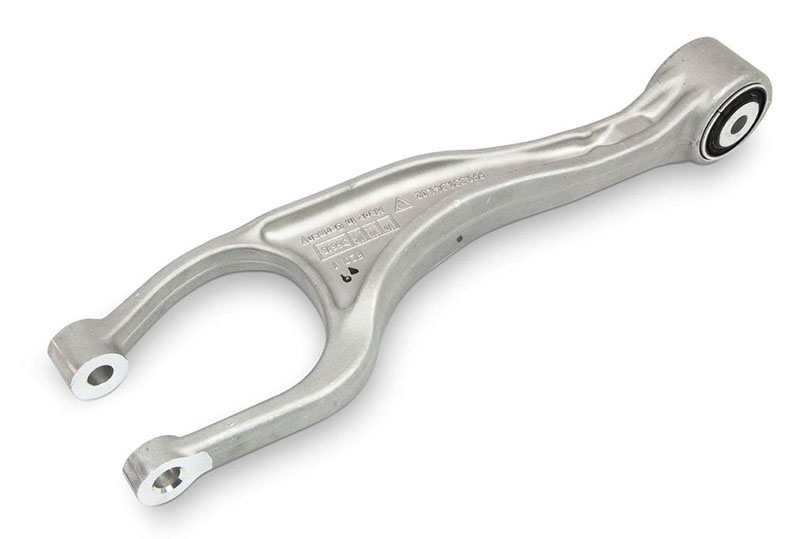 Here’s how the standard 991 Lower wishbone arm looks like. 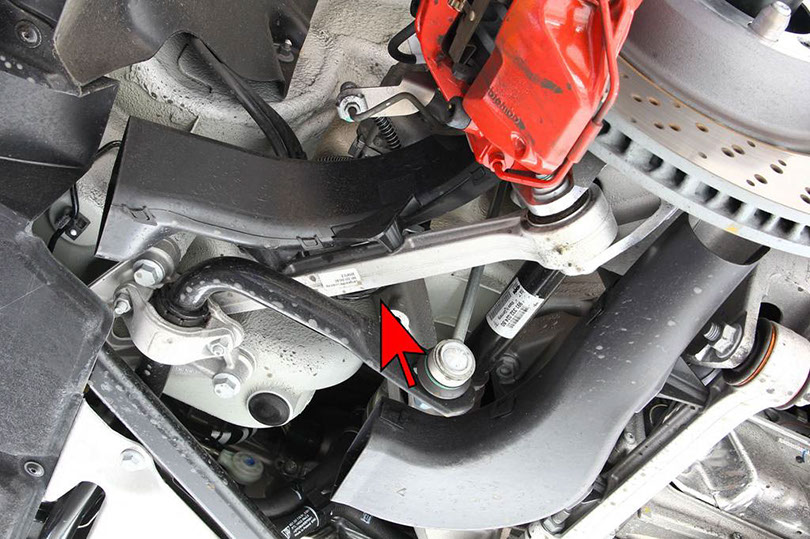 The second control arm is running at about 40 degree angle from the wishbone. This is a fixed length arm and there is no eccentric bolt for adjustment. This arm differs significantly from the standard 991 control arm as well. 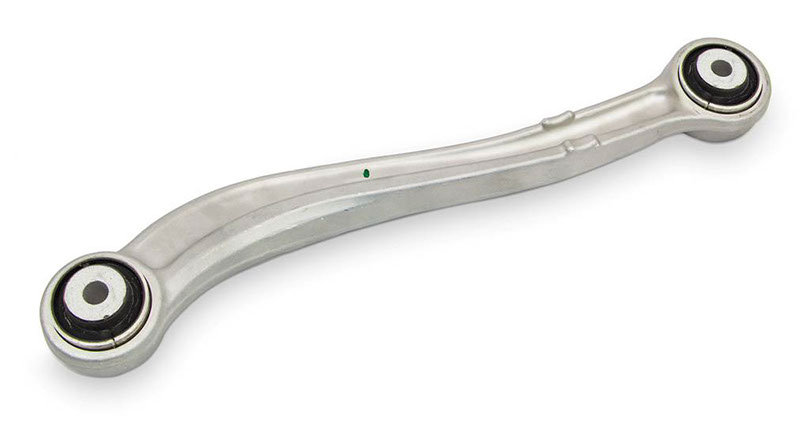 The standard control arm is s-shaped, while the GT3 arm is straight.

Another observation we made is that the GT3 version of this arm uses harder bushings. 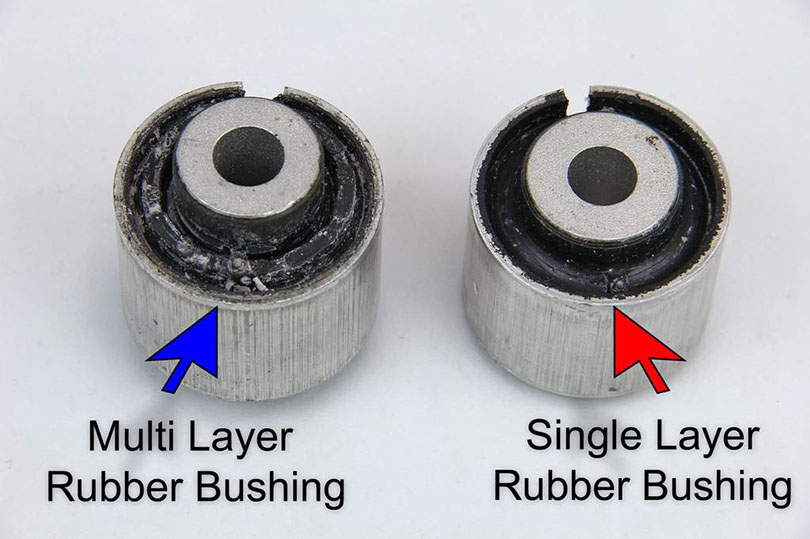 Porsche seems to be using two kinds of bushings on the 991 cars. One (red arrow) is composed of a single layer of rubber, while the other is composed of multiple layers. The multi-layer bushing has an additional solid metal layer inserted between two layers of rubber. While the s-shaped control arms on regular 991 cars use the single layer bushings, the GT3 bushings have been replaced with the harder three layer version. Harder bushings are more resistant to deflection and compression under heavy cornering loads and hold alignment better.

There are two upper control arms plus track rod. In the case of the GT3, the track rod has been replaced with an actuator providing rear axle steering. More on this later. 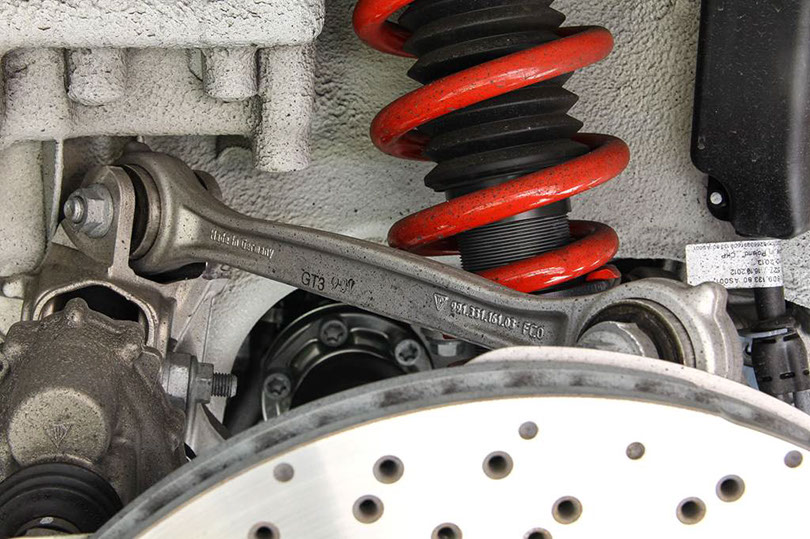 The upper control arms, are the only two arms in the GT3 suspension system that are similar to the rest of 991 cars. The diagonal upper control arm as pictured above shares the part number with the 991 Carrera cars. However, the bushings have been swapped out with harder, multi-layer bushings as described above. The rest of the 991 lineup seems to be using softer, single-layer bushings. 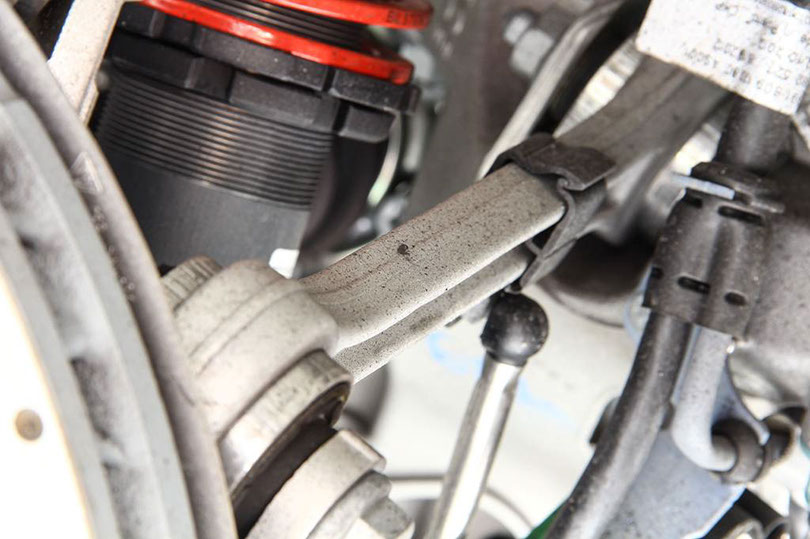 The other upper control arm is the only control arm in the whole suspension setup that appears to be the same as the rest of the 991 cars. 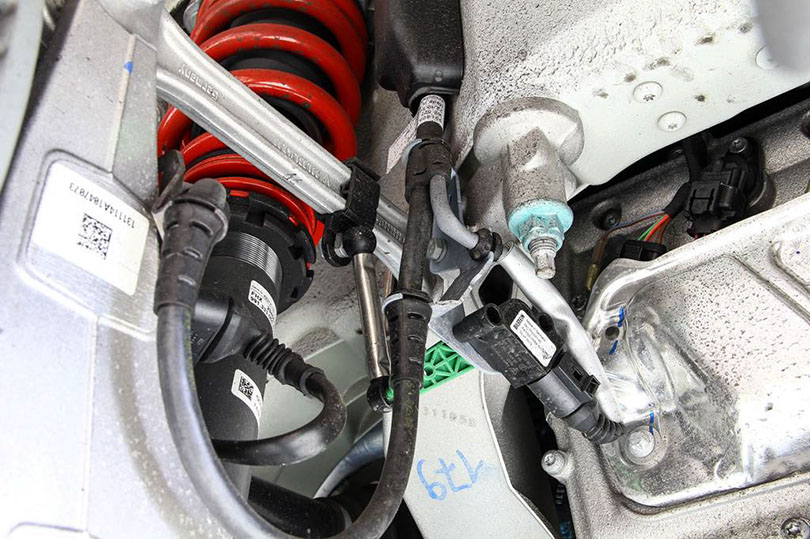 The leveling sensor is mounted to the upper control arm. This swing arm sensor functions in the same way as the sensor found in the front suspension. The sensor measures the angle and travel and feeds the data to the PASM and other systems. 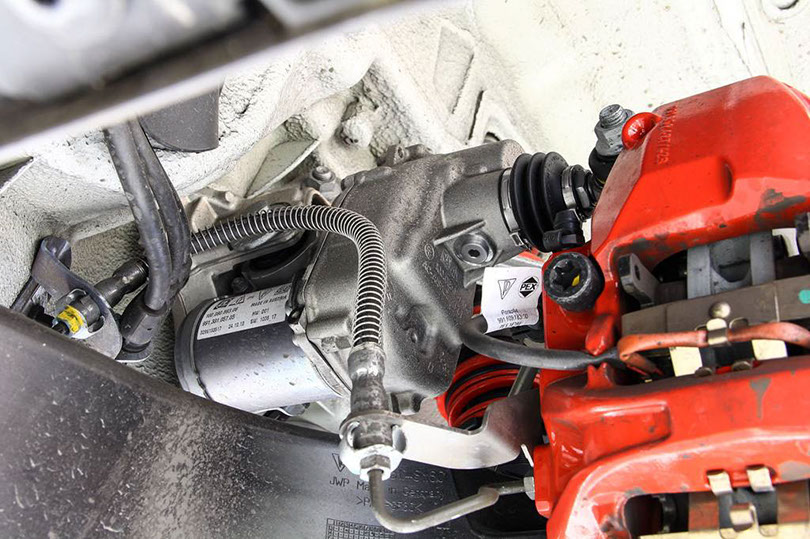 As mentioned above, the track rod has been replaced with an actuator. Track rod is basically responsible for the toe alignment. Replacing this arm with an actuator allows for dynamic change of the toe, basically steering the rear wheels. It’s a nifty little device. The eccentric adjuster is retained, so static toe can still be set.

Above is a video demonstrating the rear steering in action. The rear wheel counter steer up to 50 km/h to create an effective wheelbase that is shorter, and making the car more maneuverable. Above 80 km/h the wheel steer in the same direction for improved stability.

We’ve also gathered some data about the rear steering. We’ve measured the actuator movement at 15.875mm, which gives a toe change at idle of +/- 1.25 degree. It’s important to note that the pivot axis is not at center of wheel. Ackerman steering is not present. 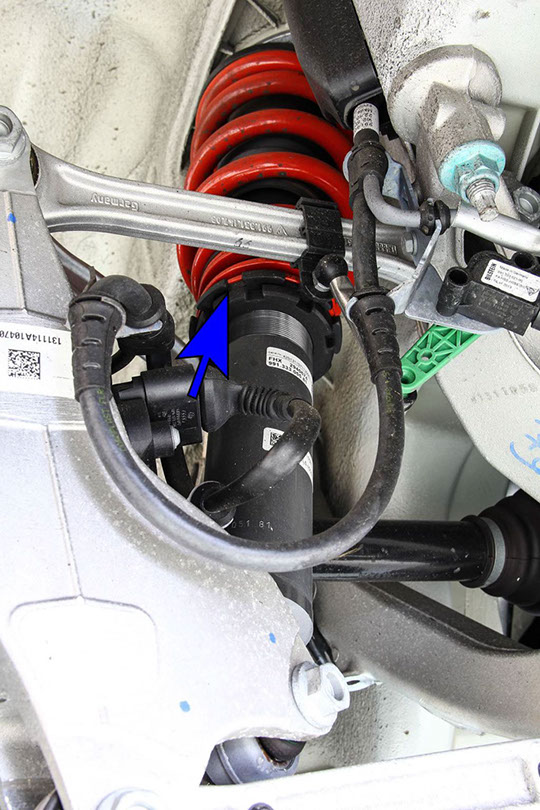 The rear shocks are fully height adjustable coilovers, equipped with PASM. Like the fronts, the rear has been dropped by 30mm vs the stock 991 configuration. There’s still about 18mm of thread left on the threaded body.

The rear coilovers also include a helper spring (blue arrow). Note the flat coil sitting on the lower perch. The helper spring collapses under very light load, and is completely collapsed when the car is on the ground. The helper spring keeps the main spring properly seated on the upper perch when the wheel goes into full droop. This is important, because if the suspension travels past the main springs point of compression, which can be common under hard cornering, the spring could fall off the perch and not realign itself properly. 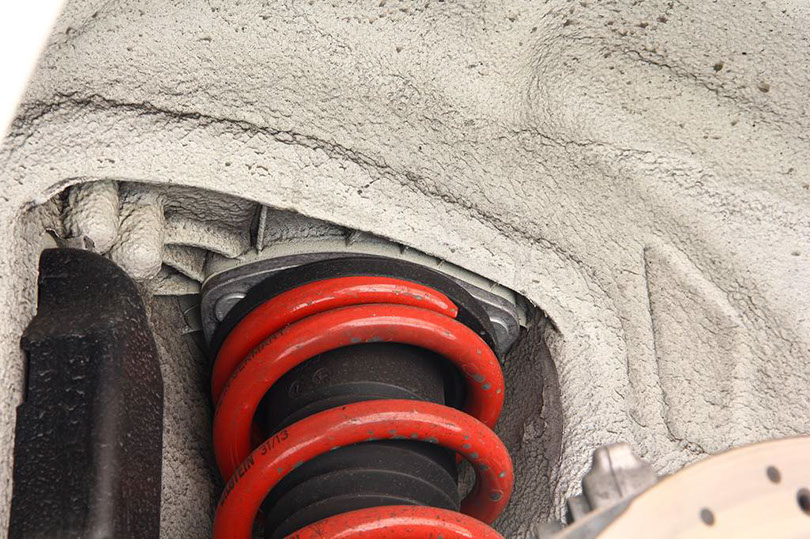 Although not visible from the outside, the shock mount bushing is also replaced with a spherical bearing. 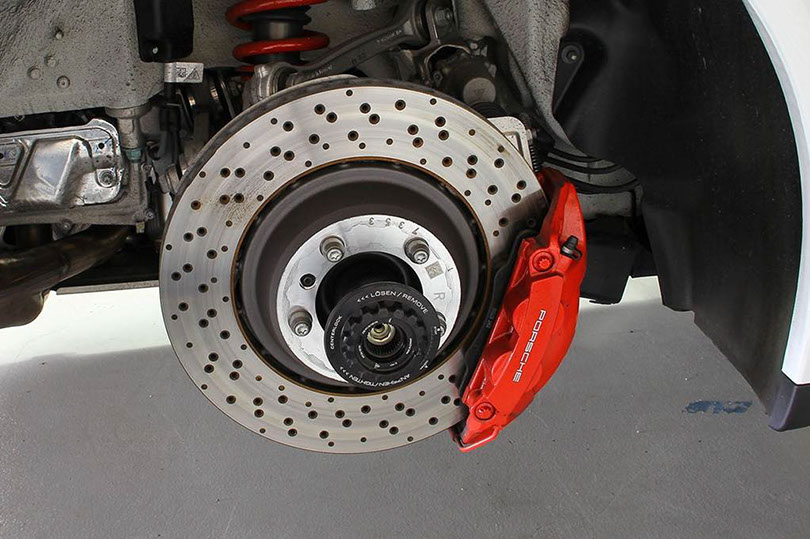 The rear brakes are equally as impressive as the front. A four piston caliper is mounted on top of a 380mm rotor providing a gut wrenching stopping power. The rotor is 30mm thick with markings indicating 28mm minimum thickness. Like the front, the rotors are cross drilled and center vented. 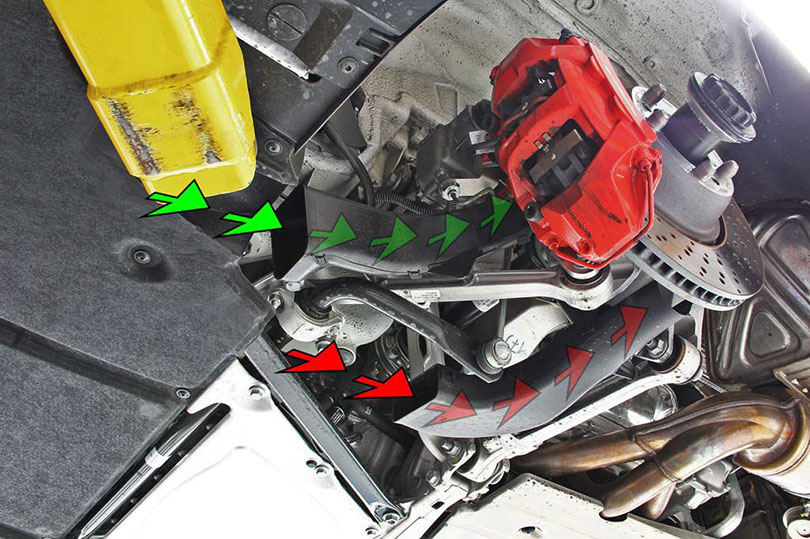 Two plastic air ducts draw air from under to cool the brakes. One is directed at the rotor while the other at the caliper. 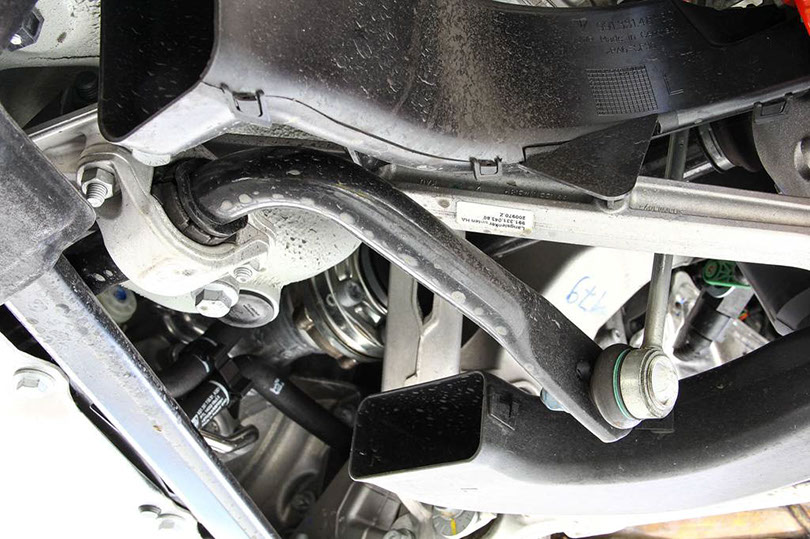 Large rear swaybars measure at about 27.5mm. Much larger than 24mm found on previous generations of GT3. There are 3 points of adjustment, with the default being at the center.

Drop links connect to the top of the rear wheel carrier.

Another interesting difference is that rear and front subframe is solid mounted to the chassis. This enhances the control and precision. Regular 991 however, retain rubber subframe mounts. 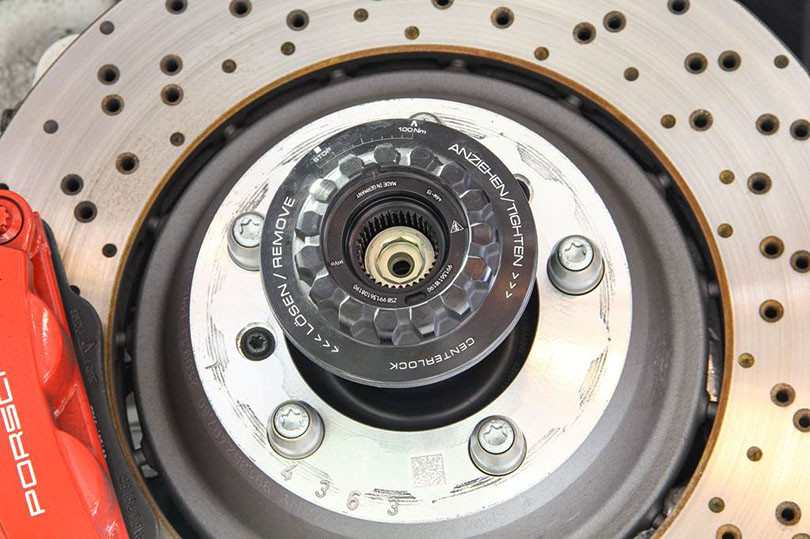 A new first for Porsche are the stock 20in wheels that are shipped with all GT3 cars. The default tires shipped with the GT3 are Michelin Pilot Sport Cup 2. Front tires measure at 245/35 and the rears are massive 305/35.

Another feature ported straight from the GT3 Cup car is the single center wheel lock that holds the wheel in place. This kind of setup is mostly found on the racetrack and rarely seen on street driven cars. Special tools are required to remove the wheel. A purpose socket and a heavy duty breaker bar to loosen the bolt and a large torque wrench that can handle 443 ft/lbs, because this is the torque spec on these wheels. Insane.